Alert for the arrival of counterfeit US$100 bills 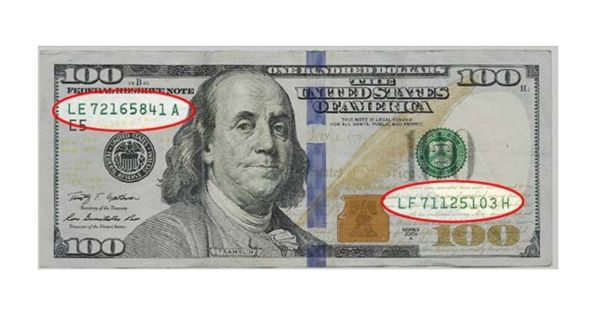 www.cronista.com
Dollar "blue" today: alert for the arrival of "double series" bills. Which are they and why do they reject these bills in the City?
....This is a dollar issue that set off alarm bells in the Peruvian market and now, with the rise of the U.S. currency in the blue exchange rate, has already arrived in the country. The adulterated bills show false numerations in their replica that can be easily identified in their front as well as old references, that is to say, prints that are already out of circulation.

BLUE DOLLAR TODAY, HOW TO IDENTIFY A COUNTERFEIT AND A REAL BILL FROM THE SERIAL NUMBER?
In the first instance, the banknotes that raise the alarm in the City are those with two different serial numbers on their fronts.

HOW IS THE SERIAL NUMBER OF A REAL DOLLAR BILL MADE UP?
The serial number is made up of a unique combination of eleven numbers and letters that appear twice on the front of the banknote, i.e. each banknote has a unique serial number, and not two different ones like the counterfeit ones that warn in the City.

BLUE DOLLAR TODAY, OTHER TIPS TO IDENTIFY A COUNTERFEIT U$S 100 BILL
The 2013 edition u$s 100 bill features a bell on the inkwell that changes from copper to green when tilted. It also features a blue 3-D security band with images of bells and numbers 100, which simulate "moving" from side to side when moved back and forth.
Q

Last night someone tried to pass off some awful fake hundreds to me, not even the cara chica ones, but the 1996 to 2012 series ones.
Give aways were as follows:
I feel bad for people not familiar with handling US Dollars/not sure what to look for, while bad, I'm sure some people would fall for them.

Why are the markers a big red light?
This is an alarming story. I haven't received any new ones for a year, but I still had to break out my (pathetically small) stash and look to make sure.
Q

Redpossum said:
Why are the markers a big red light?
Click to expand...

I found it to be a red light because if they weren't fake, why would she bring the marker to show they're real? At least that's how I looked at it.