Recently, Hybrid-san made a number of posts and asked many questions as he considered the possibility of buying land and building a country home in Argentina. I promised to start a thread about "country living" in Argentina and here it is. I'll provide a few details of how I got where I am now and what it's like to live here. I will be happy to answer questions and I hope anyone else who is living in a rural or semi-rural setting will share their experiences in this thread. I am referring to life in the "open" country, not in a barrio cerrado or a ""gated" community.

When I arrived in 2006 I began searching for apartments in Capital Federal as well as houses in Tigre with a maximum price of $100K USD. At that time and at that price, it was possible to buy a 100 sq meter apartment near Jardin Botanico or a 75 sq meter apartment in Recoleta. A relatively small house in Tigre could also be found in that price range. As I searched on line I also found a very nice "casa quinta" in Tortuguitas for just under $100K, but I was strongly advised against buying there as it might be even more "dangerous" for a foreigner than an Argentine. I heeded the advice.

Within six months of my arrival in BA, I bought an apartment in Recoleta but I continued to check on line from time to time to see what was available in all provinces of the country. I also searched for country homes in all of the provinces of France, something I started doing even before coming to Argentina in 2006. By 2010 I had permanent residency in Argentina and I had enough of city life, especially Ciudad Buenos Aires. Moving to France was no longer a realistic possibility so I renewed my search for a casa quinta in Argenitna. Using google I found over two hundred listings in a number of websites. The ReMax site had dozens of properties in the casa quinta (residential farm) category and one in particular captured my attention.

Based on the photos, the house and the land were exactly what I was looking for and the price was right. Even if it meant selling my apartment quickly for a "lower" price than I might get if I held out longer, I decided to make an offer to buy the house. I had absolutely no idea what the area was like but I asked a lot of questions and did some on line research about the nearby towns and cities. The fact that it was not a destination for foreign tourists was something I considered to be a positive. Neither was the fact that I would be the only North American living on the outskirts of the "suburban" village of 1500 inhabitants, none of whom speak English.

To make a long story short, I offered the seller $2000 for a 60 day option to sell my apartment. It took just over 60 days to get the first offer for the sale of my apartment and I accepted. The boleto took place ten days later and the next day I flew to the closest city to the house that had direct flights from BA. The seller met me at the airport and drove me to the property. Thirty minutes later, in the kitchen of the house (where i am sitting at this moment) we signed a boleto. Six weeks later the escritura for my house took place in CF and I rode to my new home in the cab of a "shared mudanza" that was owned by a friend of mine in CF. We arrived at the house at nine AM and the seller's two sons unloaded my furniture from the truck.

I once posted that I did not move here to assimilate, but, to a great extent, that's exactly what has happened and I'm very happy to be able to say it. In the four years I have lived here my ability to speak and understand Spanish has improved a great deal and I have developed wonderful friendships with a number of Argentines, including the family I bought the house from. It's amazing how helpful and protective everyone has been, making sure I know the best (and most trustworthy) mechanics to take my car to, the best electricians and plumber, the best places to buy meat, bread, veggies, household goods, etc. One example of how nice the people are here is the mechanic who took my car to get the VTV inspection and would not accept payment for doing so, even though it meant leaving the shop (and work in progress) for over an hour (I "forced" him to accept two liters of beer).

I could share many stories like that. I do enjoy answering the one question asked by almost every Argentine I meet for the first time (often incredulously): "What are you doing here?" As I previously wrote, I am the only North American living near the village, but folks in the nearby towns are just as curious. I tell them the story of how I came to Argentina and how I found the property on line. They find it hard to believe anyone from the USA would want to live where I do, but when I explain that when I am at my property, it doesn't matter where in the world it is, they seem to understand. The fact that life is also very good here when I am not actually at my house is an unexpected but very welcome bonus. 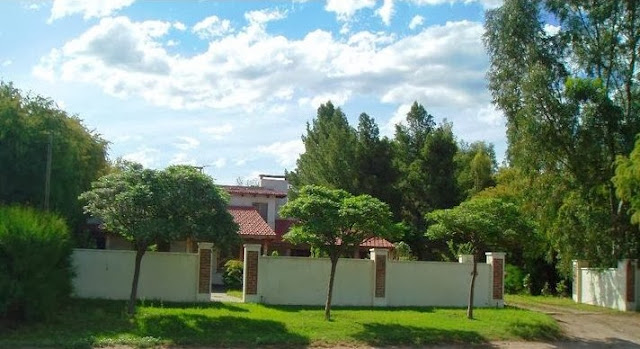 Just curious Steve, how far are you from the ocean?

I hope to do something similar in 5-10 years, but would probably consider a smaller city like Necochea, Tandil, Azul, etc.
H

steveinbsas-san,
Great! About time you started this thread. Now a few questions for you. If one to buy an approximate hectare of land to build a house
and to work the land for veggies and fruits, where one get the irrigation water.? A river nearby or do the "Pozo" digging or rely in local
aqueduct water? Also you missed mentioning how much money you put in for your property, tax, fees, etc. I would like to know..

Also, I'm thinking to do the Argentine trek by overlanding with my vehicle, and once if finding the desired place and build for my dwelling,
can I register my foreign vehicle to Argentinas? I have many more questions as to how to bringing the necessary funds to buy the property and more...
S

That is very interesting and the house looks nice - very green and peaceful. The idea is interesting to me but I am an urban person and I wonder if I wouldn't get bored. Anyway, can you tell us how big the house is and what it would cost now -- and did you have to do a lot of remodeling? How expensive is it to maintain? Are you retired? How do you spend your days?

I am also curious about your idea of living in France. Don't think it is too practical for me but I'd like to know where you went for information. Thanks.

sleslie23 said:
Just curious Steve, how far are you from the ocean?

I hope to do something similar in 5-10 years, but would probably consider a smaller city like Necochea, Tandil, Azul, etc.
Click to expand...

My house is about two KM from the ocean, but the nicest nearby coastal town is Pehuen Co.

The town of Sierra de la Ventana is also close enough for a day trip.

The "village" that I live near has a clinic (with ambulance service to the closest hospital) as well as about a dozen "dispensas" (small markets), a hardware store, a couple of carnecerias, a bakery, an auto mechanic, but no restaurants or cafes.

I like living in "relatively close" proximity to the city, especially as that offers access to many goods and services that would not be found in smaller towns (less than 100,000 residents). I also like living less than 30 minutes from an airport with direct (daily) flights to and from BA.
J

really interesting to me. I have had a place in Palermo since 07 and will retire to Argentina. never thought about living in the country so to speak. what are the utilities like? electric, gas, internet. are they dependable and how expensive? thx for the info
S

We have now lived in La Falda, Cordoba prov. for three years, after living in BA for 3 years. We come from a town of 1,000 in Oregon, so after retiring and moving to Argentina, BA was a great change from Oregon rural life. We rented apartments in BA for 6 months at a time, in different barrios: Belgrano Chico, San Telmo, Montsorrat, near the zoo...loved every minute. We also spent 6 weeks traveling all over Patagonia, spent time in Mendoza, Rosario area, Salta, .....but then we happened to find the Punillas in the small mountain range east of Cordoba.....lots of small towns in a string along the side of the mountains....one still finds horses on the streets, lots of vegi gardens, chickens in the road., but La Falda (due to it being a big Argentine tourist town during summer, had free wifi down town, and the ourdoor cafe society that we loved in BA, modern services) is where we decided to move to .temp .rentals were a bit harder to find than in BA ....we found word of mouth was better. we have rented 3 different properities now in the La Falda area, each one getting better and cheaper. we now rent a three story 3 year old house with a beautiful yard and garden...4000 pesos per month ....we definitely feel at home here, even though there are only a couple of other people in town that are expats. I would strongly recommend renting places instead of right away trying to buy...even in this little town, each barrio within has a whole different feel/problems/advantages that one needs to spend time in to see if its a good fit....

We love the country life, the only thing that we did not account for were the security issues and the associated cost that this brings.
It can be upward of $30,000ar a month, plus the cost of another house. :lol: :angry: <_< B) B)
You must log in or register to reply here.
Share:
Facebook Twitter Reddit Pinterest Tumblr WhatsApp Email Link
Top