Well, the great leader of the Boliviarian revolutionary Republic of Chavezlandia and yet now even worse Madurolandia.. aka..Venezuela,Nicolas Maduro has in his usual never-ending speeches said that Rajoy and Spain are behind an attempt to overthrow him and all of his great leaps forward(Like the great leaps in the catastrophic Cultural Revoltion in the People's Republic of China from 1966-1976).
I'm sure that the streets of Madrid are sleepless in their great fear and enlightenment by Maduro that La Madre Patria is behind such an evil attack against the second biggest and thrid most loved Libertador Bolivariano!
And I bet that the pueblo venezolano, in its majority, is also sleepless waiting for the moment this would only happen!

Maduro is a joke. Too bad the butt of the joke is the Venezuelan people.

Eventually they will get tired of stampeding for basic supplies in the supermarket and get miserable enough that they throw him out and they stop falling for his BS. But from what I've seen so far it looks like Venezuelans are not exactly critical thinkers. If they really believe their dead comandante speaks to Maduro in the form of a little bird then things might need to get a whole lot worse first.

el_expatriado said:
If they really believe their dead comandante speaks to Maduro in the form of a little bird then things might need to get a whole lot worse first.
Click to expand...

The road to political maturity is often quite painful. But that is a journey that the Venezuelan people must endure in order to grow and eventually pick better leaders.

el_expatriado said:
[...]But from what I've seen so far it looks like Venezuelans are not exactly critical thinkers. If they really believe their dead comandante speaks to Maduro in the form of a little bird then things might need to get a whole lot worse first.
Click to expand...

I haven't seen much critical thinking in many parts of the world, to tell the truth, but even less so here in SA.

My wife came here ten years ago thinking that mermaids really existed - that's what she was taught in school. Her grandfather was a medicine man who drove evil spirits out of people, protected people's cows and crops and was buried with his spell book because he didn't know anyone trustworthy enough to handle such powerful spells. My oldest girl that lives with us (wife's sister) was told that Mars was inhabitable, with water, plants, animals, etc, about two days after she and I looked at the photographs from one of JPL's rovers in 2007 (2008?).

I could go on for awhile, probably.

Granted, what Io mention was in Paraguay, not here, nor in Venezuela. The last experience I had of Venezuela was a couple of months about 17 years ago for work, so I can't talk much to that culture, particularly as it is today (but it was a beautiful country with friendly people when I went there). But I have seen some pretty "tall" beliefs (as in "tall tales") here in Argentina, including the myth that some kind of Super-Daddy (or -Mommy) is going to come and save everyone from a life of shit by singing songs, holding hands, beating drums and taking money from everyone that lives here.

Just doesn't seem like that far of a stretch that people in Venezuela believe that karma turned Chavez into a little bird after he died, who flies around Maduro's head and whispers sweet nothings in his successor's ear... 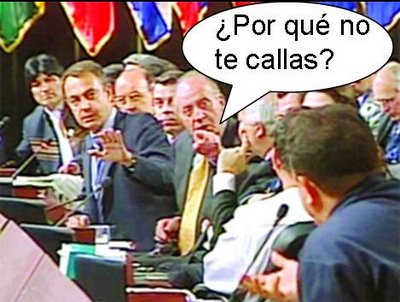