Is Hugo on the Ropes?

With the fall of oil prices now under $90 dollars a barrel will Hugo Chavez run out of money? The problem there is the entire economy has basically withered away (with the exception of oil) under his terrific leadership. He is now talking about austerity budgets for 2009. Could it be that the WW financial crisis and resulting economic slowdown will spell the end for him?

What will happen to some of his client states if his financial tap is turned off? I thinking of Ecuador, Bolivia, and Argentina. Probably no more sweetheart loans to Argentina. Is this why the K's are eating crow and out trying to settle with creditors? Perhaps they realize the country is going need to start borrowing soon. My guess is all these governments are going to see tough times ahead.
D

I really don't think so, from what I read Hugo has an unbelivable amount of oil and influence over the south american countries.
I think we will se a lot more of him.
S

New article on Hugo indicating that the drop in oil prices is having an effect. The effect on Argentina would be no more sweetheart loans(one reason for the pension grab last week) and probably no more suitcases full of cash. Could this be the beginning of the end of the various left wing governments he has subsided in South America?

I'm thinking that they'll have problems.

Also, Ecuador has it's own oil and Bolivia has natural gas, so the oil drop is going to have an effect on Ecuador. Don't know about the natural gas prices, but I do know that those in the gas rich regions are fans of the national government. How many of those regional big wigs can get arrested before a coup errupts?
C

It could be a problem for Hugo. I think oil still will drop to about $30/barrel. We haven't hit peak oil, yet. 2009 will be a rollarcoaster ride for oil.
L 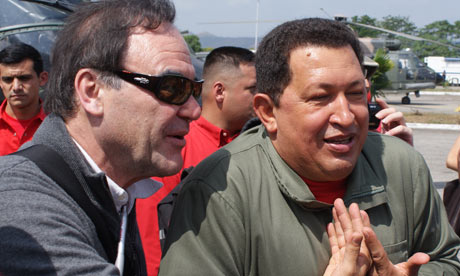 South of the Border…
Oliver Stone with President Hugo Chavez.
Photograph: Jose Ibanez​
South of the Border is Oscar-winning director Oliver Stone's record of a trip to Venezuela to meet the president, Hugo Chávez. Ahead of the film's premiere at the Venice film festival on Monday, Stone writes about his hopes for the film, and the future of US foreign policy in the region.

I've been fortunate to be able to make several films about North America's neglected "backyard" – Central and South America.

The low-budget, independently-shot Salvador, about the US involvement with the death squads of El Salvador, and starring James Woods in an Oscar-nominated performance, was released in 1986; this was followed by Comandante in 2003, and Looking for Fidel in 2004, with both of these documentaries exploring Fidel Castro in one–on–one interviews.

Each of these films has struggled to be distributed in North America. I was invited to Venezuela to meet President Hugo Chávez for the first time during his aborted rescue mission of Colombian hostages, held by the Revolutionary Armed Forces of Colombia (FARC), during Christmas of 2007.

As is often the case, the man I met was not the man I'd read and heard about in the US media. I was able to return in January 2009 to interview President Chávez in more depth. Was Hugo Chávez really the anti–American force we've been told he is? Once we began our journey, we found ourselves going beyond Venezuela to several other countries, and interviewing seven presidents in the region, telling a larger and even more compelling story, which has now become South of the Border.

Leader after leader seemed to be saying the same thing. They wanted to control their own resources, strengthen regional ties, be treated as equals with the US, and become financially independent of the International Monetary Fund (IMF).

Based on our experiences in Iraq, Americans must question the role of our media in demonising foreign leaders as our enemies. The consequences of this can be brutal.

This is a continuing story. It is going on right now with Hugo Chávez in Venezuela. Hopefully, in our film, you'll get to hear a far different side of the "official" story.

I don't think he's on the ropes just yet, and so long as the ALBA nations can hold themselves together they all have huge untapped natural resources that will create a lot of wealth in the decades to come.