Argentina is, by nearly all accounts, catapulting toward default after running up more than $100 billion of debt. Some say it’s just months away. Others say it’s actually already happened on a small portion of bonds. For even the casual observer, the whole thing has a certain feeling of deja vu...

The article looks interesting but it is only for subscribers. Can you paste it here? Thanks....

Interesting how almost all of them were done by right wing military dictatorships. Except for Christina refusing to pay Singer. And, somehow, Macri is a good guy for paying off Singer, who made 90% on his money?

on the brink said:
The article looks interesting but it is only for subscribers. Can you paste it here? Thanks....
Click to expand...

No paywall when I clicked, here you go:

Photographer: Erica Canepa/Bloomberg
One Country, Eight Defaults: The Argentine Debacles
By
Ben Bartenstein
,
Sydney Maki
, and
Marisa Gertz
September 11, 2019, 7:00 AM GMT-3
Argentina is, by nearly all accounts, catapulting toward default after running up more than $100 billion of debt. Some say it’s just months away. Others say it’s actually already happened on a small portion of bonds.
For even the casual observer, the whole thing has a certain feeling of deja vu. The South American nation is a defaulting machine with few peers in the world.
The first episode came in 1827, just 11 years after independence. The most recent one came in 2014. In between, there were six others of varying size and form, according to Carmen Reinhart, a Harvard University economist. Almost all of them were preceded by boom periods as, perhaps most famously, when European migrants transformed Argentina into an agricultural powerhouse and one of the world’s wealthiest countries by the late 19th century. Invariably, profligate spending, combined with easy access to capital supplied by overzealous foreign creditors, did the nation in.
“The big narrative is always that there’s no fiscal discipline,” said Benjamin Gedan, director of the Argentina Project at the Wilson Center in Washington. “They want to import products that require dollars, they overspend and borrow in dollars, and they don’t generate dollars because they have a closed economy. And so it’s this endless cycle. That’s the story every time.”
Here’s a brief look back at each of the eight defaults — and a look ahead to what comes next.

1827
After declaring independence from Spain in 1816, Argentina’s economy quickly opened itself to foreign trade. Some historians would later refer to the early 1820s as the nation’s “happy experience,” a period of peace, prosperity and fascination with European aristocracy. That soon changed. Argentina had sold bonds in London to help finance its nationhood. That debt came under pressure when the Bank of England raised interest rates in 1825. Argentina defaulted two years later. It took another 30 years for the nation to resume payments on the debt.

On top, Argentina declares independence from Spain. Left, an English illustration of the "Buenos Ayres" flag from 1838 and right, the Bank of England in London in 1828.
Source: Getty Images (3) 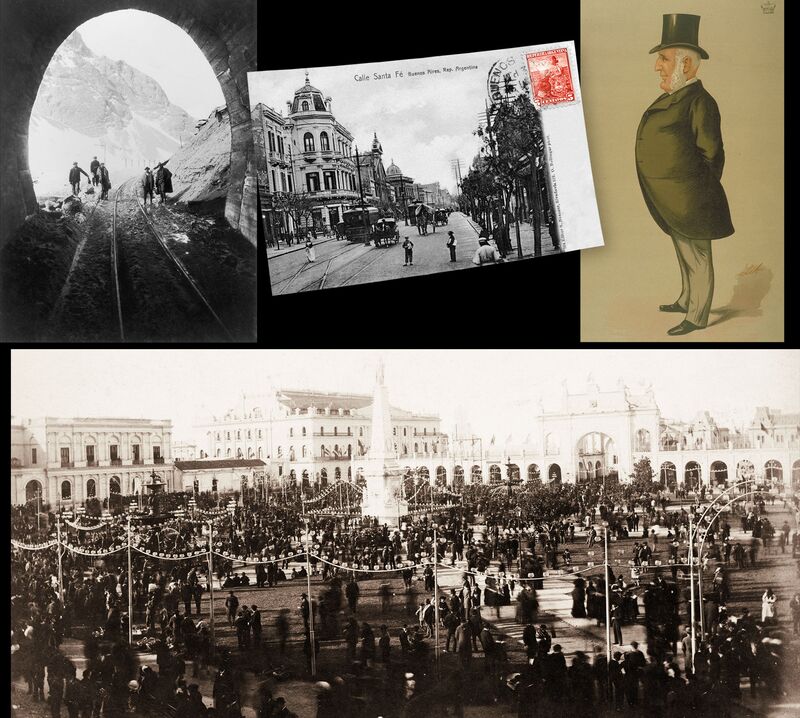 1890
In the late 19th century, Argentina went on a borrowing spree to build trains and transform Buenos Aires into the cosmopolitan capital it is today. London’s Barings Bank aggressively invested in the nation’s railroads and other utility projects. The south of Argentina boomed, too, as sheep farming spread across the Patagonian grasslands and gold prospectors rushed to Tierra del Fuego. That euphoria faded when the commodities bubble burst. The nation halted debt payments, spurring a run on Argentine banks and the resignation of President Miguel Juarez Celman. That November, Barings teetered near insolvency. Argentina emerged from default four years later, buoyed by fresh capital from the U.K.

On top from left to right, construction on the Argentine Railway at Mendoza c1905, a postcard of Calle Santa Fe in Buenos Aires and a cartoon depicting 1st Lord Revelstoke, senior partner at Barings at the time of the crisis. Below, a crowd in Plaza de la Victoria (Plaza de Mayo) c1880.
Source: Getty Images (3); The Baring Archive PR/103 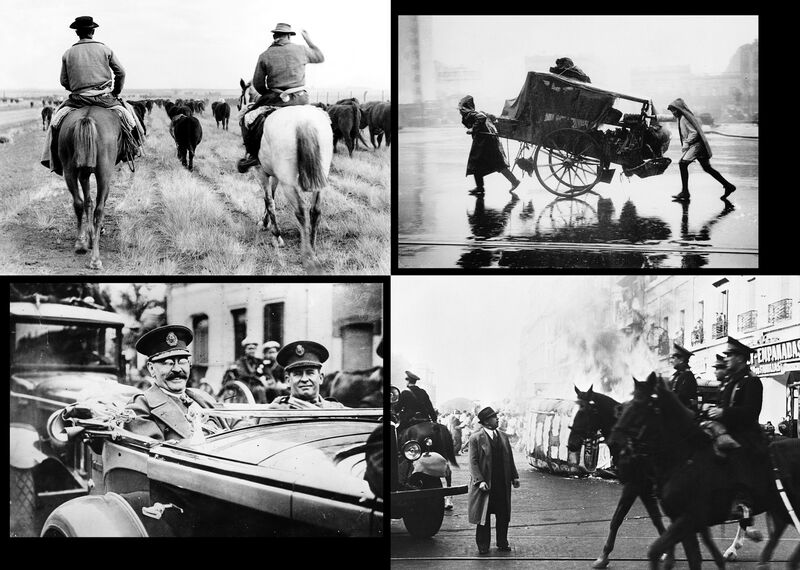 1951
An influx of immigrants and foreign capital fueled Argentina’s rise to one of the world’s most prosperous countries by the early 1900s. But World War I hit the nation’s economy hard, as did the Great Depression that followed a decade later. Unemployment and social unrest soared. In 1930, a coup brought the military into power, ushering in a period of political instability — eight presidents in two decades — and a policy of import substitution, which closed off the economy and helped trigger a default.

Clockwise from left, cowboys herd cattle in 1951, vendors pull their cart through a flooded street in Buenos Aires in 1930, a bus burns in Plaza de Mayo during the revolution of 1943 and José Félix Uriburu in 1930.
Source: Getty Images (4) 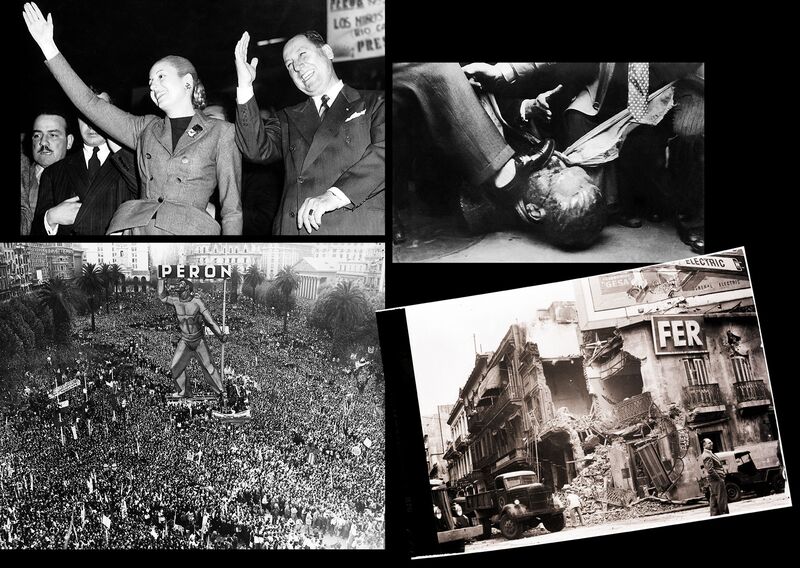 1956
The populist strongman Juan Peron rose to power in 1946 and proceeded to nationalize companies, redistribute wealth and assert greater government control over the economy. The policies he and his wife, Evita, carried out would become Argentina’s dominant governing principle for roughly half of the next seven decades. Initially, they stoked growth and expanded the middle class. But in 1955, Peron was ousted in a coup, plunging the economy into turmoil and leaving the country struggling to keep up with debt payments. The next year, the military junta struck a deal with the Paris Club of creditor nations to avert a larger default.

On the left, Juan and Eva Peron salute a crowd in 1951 and Peron supporters gather in front of the presidential palace in 1948. On the right, people step on the face of a bust of Juan Peron, and a building damaged by army tanks and cannon during the revolt in 1955.
Source: Getty Images (4) 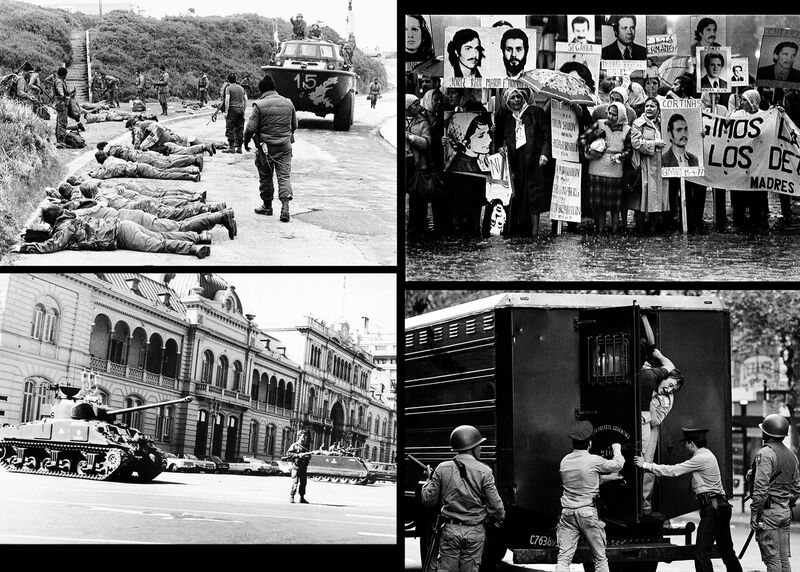 1982
During Argentina’s Dirty War, the military dictatorship borrowed, mainly from U.S. and British banks, to fund infrastructure projects and state industries. The nation’s foreign debt ballooned to $46 billion from $8 billion. Then commodity prices collapsed again when the Federal Reserve, under the leadership of Chairman Paul Volcker, raised U.S. interest rates to as high as 20% to tame inflation, spurring debt crises across Latin America and the rest of the developing world. Argentina became one of 27 nations, including 16 in Latin America, to reschedule its debt.

On the left, British troops surrender in Port Stanley, Falkland Islands, in 1982, and soldiers guard the Casa Rosada after a coup in 1976. On the right, mothers hold photos of their missing children during a demonstration against the dictatorship, and a protestor is arrested in Buenos Aires in 1982.
Source: Getty Images (4) 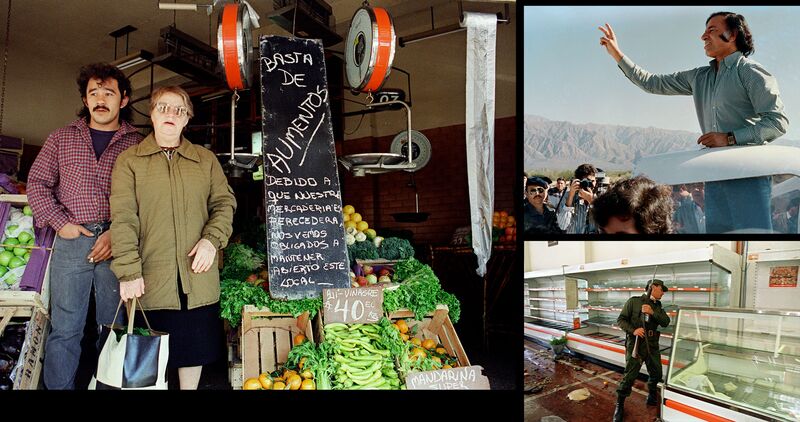 1989
A series of failures in the late 1980s to curb inflation — which climbed over 3,000% — triggered another default in 1989 and brought Peronist leader Carlos Menem into power. His government reduced inflation, privatized state companies and lured foreign direct investment, steering the nation from recession to double-digit growth by Menem’s second full year in office. Still, Argentina’s foreign debt surged to more than $100 billion, the result of Menem’s inability to rein in spending. By the time he left, the nation had fallen into recession once more amid rising unemployment, constrained exports and an overvalued peso.

On the left, produce-stand owners protest inflation. On the right, Carlos Menem on the campaign trail and a soldier inspecting a looted supermarket in Rosario.
Source: Getty Images (3)

2001
As the brutal recession entered its fourth year, wiping out about two-thirds of the nation’s gross domestic product, Argentines rioted around the rallying cry, “All of them must go!” The country had five presidents in two weeks, all while declaring what was at the time the largest default by a country in history. Payments were halted on $95 billion worth of bonds. That led to restructuring deals with creditors in 2005 and 2010 under Nestor Kirchner and his wife, Cristina Fernandez. Most bondholders agreed to take the 30 cents on the dollar offered, but a contingent led by hedge-fund billionaire Paul Singer held out and demanded full repayment.

Clockwise from left, Nestor Kirchner, protesters walk through smoke and tear gas in Plaza de Mayo in 2001, a woman exits a bank branch that has put up a metal curtain to protect it from violent demonstrations in 2002, and demonstrators and rioters in 2002.
Source: Getty Images (4)

2014
Haunted by a legal drama with Singer and other holdout creditors, Argentina defaulted once again, albeit on a lesser scale. Fernandez’s administration missed an interest payment after a U.S. judge ruled that Argentina couldn’t distribute the funds unless Singer’s Elliott Management Corp. and other so-called “vulture funds” got paid on their defaulted debt. That dispute was finally resolved in 2016, when the new president, Mauricio Macri, paid the holdouts so Argentina could regain access to international debt markets.

Current Crisis
Today, Fernandez appears on the verge of supplanting Macri at Casa Rosada, this time as vice president to Alberto Fernandez, the man who was her first cabinet chief. Their landslide win in last month’s primary triggered a collapse in the peso, stocks and bonds that ultimately forced Macri to impose controls on currency trading — which he had proudly lifted just days after taking office back in 2015 — and to call for a debt reprofiling.

Macri’s inability to tame inflation and stoke growth was the immediate cause of the crisis, but really the foundation was laid a decade ago, when Fernandez burned through the windfall provided by surging commodity prices, strangled the economy with a vast network of government controls and manipulated data. Traders see a full-blown default as a foregone conclusion once the new administration takes over in December: The country’s foreign bonds can be purchased today for as little as 40 cents on the dollar.

On the top left, Alberto Fernandez waves to supporters and on the right, Mauricio Macri gives a press conference on Aug. 12. Below, a fence stands in front of the Casa Rosada on Aug. 30.
Source: Getty Images (2); Bloomberg"

we both posted at the same time.... deleting mine

camel said:
we both posted at the same time.... deleting mine
Click to expand...

I'll actually only leave mine up for a few days as it's fair use for discussion on the forum in my view. I'll take it down after to avoid copyright violations tho
O

London2Baires said:
I'll actually only leave mine up for a few days as it's fair use for discussion on the forum in my view. I'll take it down after to avoid copyright violations tho
Click to expand...