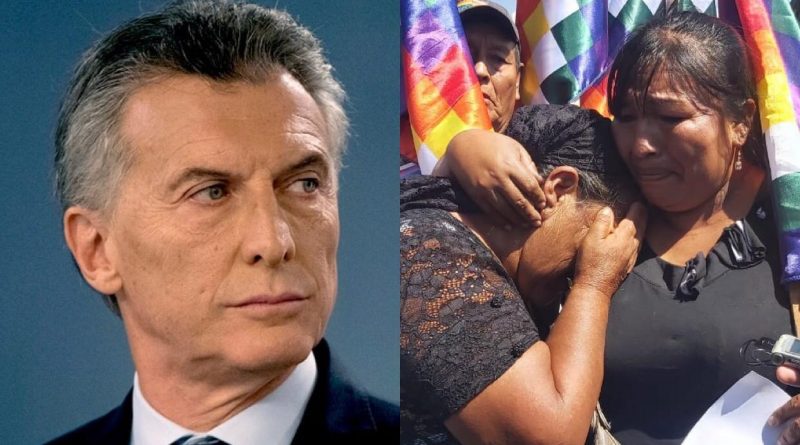 Latest News
Argentina’s Macri Sent Arms For Bolivia Coup Massacres
July 9, 2021Argentina, Bolivia, Bolivia coup, Jeanine Añez
Bolivia’s Foreign Ministry has published documents that show how the government of Argentina, under President Mauricio Macri, supplied the bullets used by the Añez dictatorship used to repress anti-coup protests across the country, including in Sacaba and Senkata, where numerous protesters were shot dead.
In a press conference today, Bolivian Foreign Minister Rogelio Mayta, published an official letter dated November 13th, three days after the coup against Evo Morales, in which Bolivian military General Jorge Gonzalo Terceros, Chief of the country’s Air Force at the time, thanks the then Ambassador of Argentina Normando Alvarez Garcia, and formally registers the delivery of 40,000 cartridges of caliber 12/70. The letter also notes the delivery of tear gas canisters and grenades.
Minister Rogelio Mayta stated, “Argentina, presided by Mauricio Macri, gave lethal weapons to the Bolivian Armed Forces who repressed social protests in November 2019. On November 13th they were thanked. November 15th, two days later, the massacre in Sacaba was carried out. A few days later, November 19th, the massacre in Senkata was carried out,”
Continuing, Mayta said, “we are outraged because there was a foreign government who colluded in the carrying out of serious human rights abuses”.
The military aid from Argentina came at a critical moment when the newly declared Añez dictatorship was facing mass protests across the country from indigenous social movements who were calling for the return of democracy. Argentina was not the only country that saved the coup in the first weeks. The neoliberal government of Lenin Moreno in Ecuador also sent emergency military aid during the same period.
Justice Minister Ivan Lima stated, at the time, that Bolivia would be opening investigations into the foreign interference from Ecuador, saying,
“The investigation that Ecuador is carrying out and that we will present in Bolivia must prosecute this international crime against humanity, based on the use that was made of these weapons against the Bolivian people. The responsibility of Añez and Lenin Moreno cannot go unpunished”.
A total of 27 protesters were shot dead by Añez regime forces in Sacaba in Senkata. Protesters were calling for the return of democracy and an end to the illegal Añez regime that had seized power through a coup and proceeded to rule, unelected, for 11 months.
The revelations also show the collaboration of General Terceros, who has been arrested, with foreign powers to carry out these massacres. Terceros has hit headlines in mainstream media for false claims about the sequence of events that led to the coup against Evo Morales on the 10th of November.

camberiu said:
... in which Bolivian military General Jorge Gonzalo Terceros, Chief of the country’s Air Force at the time, thanks the then Ambassador of Argentina Normando Alvarez Garcia, and formally registers the delivery of 40,000 cartridges of caliber 12/70.
Click to expand...

If this goes anywhere it could establish an interesting precedent. I would like to see Brazil held to account for supplying similar arms and munitions, and tear gas, to Venezuela to suppress protests there.

FrankPintor said:
If this goes anywhere it could establish an interesting precedent. I would like to see Brazil held to account for supplying similar arms and munitions, and tear gas, to Venezuela to suppress protests there.
Click to expand...

Good luck with your non-issue.

Brazil bans tear gas exports to Venezuela due to violence

“(Brazil) did absolutely the correct thing in denying permission for the shipment,” Capriles told Reuters. “We’re working on the others ... The only (holdout) seems to be China.”
Click to expand...

Green are not lethal, red are lead ammunition. I don’t think Argentiina had 40.000 non lethal ammo.

Ah, OK, so in this case "calibre" does not mean literally caliber, but is just used in an abstract sense as a designation of the cartridge. These are obviously 12-gauge shotgun shells.

Gauge of shotguns is a weird business. Essentially, it's how many lead balls of that diameter it would take to equal a pound of lead, and we are speaking of theoretical lead balls equal to the inside diameter of the barrel, not the little lead pellets inside those plastic shells. The size of the little lead pellets is another arcane business entirely.

What I was trying to say is that it is difficult to imagine that the Bolivian army ran out of regular bullets. My guess is that they requested rubber bullets and tear gas.

"Material belico de agentes quimicos"? Is this how would you describe lethal weapons?

It looks like Alberto is really desperate to find something new to blame Macri for. Or it is not about the weapons, but about the interference?
Last edited: Jul 11, 2021

lunar said:
It looks like Alberto is really desperate to find something new to blame Macri
Click to expand...