I know many of you know this member David Murbach who attended our dinners often. . He was a very colorful guy highly creative and who lived life to the full . He has died suddenly, may he rest in peace.

David P. Murbach, a horticulturist who added an impresario’s flair to one of the biggest jobs in the world of trees and gardens — finding the holiday tree for Rockefeller Center each year — was found dead on Dec. 23 in West Palm Beach, Fla., where he had a home. He was 57.

Skip to next paragraph Enlarge This Image 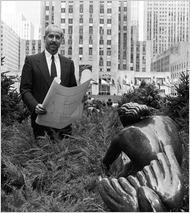 The cause was heart disease, said a longtime friend, Andre Dupuis, who found Mr. Murbach’s body when he arrived for a visit. Rockefeller Center announced his death on Monday.
For all the pleasure that the tree gave to holiday crowds that oohed and ahhed, it was a never-ending source of New York-style anxiety for the man who selected it for 26 years.
“It’s on my mind every single day of the year,” Mr. Murbach said in 1994. The “it” referred to what he turned into a year-round assignment: finding the perfect tree, somewhere, generally within a few hundred miles.
“When I’m at the nursery shopping for Easter lilies, I’m looking for a tree,” he said. “When I’m going to the beach in the summer, I’m looking for a tree.”
Of course, there are no spruces on the beach in East Hampton, N.Y., where he lived. But even there his mind was on the tree. He knew what he wanted: tallness (70 to 80 feet), fullness (seven and a half tons or so) and shapeliness (triangular branches, evenly spaced).
As the manager of the gardens division at Rockefeller Center, Mr. Murbach went about finding a tree the way a casting director would look for an actor for a particular role in a play. “You want personality: there’s density, a height and a width that we need,” he said, “but some trees have a way of holding their branches. I don’t know what else to call it but character.”
He rented helicopters to scout trees from above. One year he zipped off to see a tree whose worried owners were afraid it would fall on their house. He liked what he saw, and soon the tree was on the way to Manhattan.
Another year, a woman told her husband the tree in the yard had to go — and it went to Rockefeller Center after Mr. Murbach took a look. It arrived in Manhattan by barge after a two-day ride down the Hudson River that Mr. Murbach had stage-managed, down to checking tide charts for New York Harbor.
“Every last detail mattered: the size of the trunk, the span of the breadth of the tree, the needles — were they soft or were they hard?” said Thomas A. Madden Jr., the managing director of Rockefeller Center, who went along after Mr. Murbach had narrowed the annual search to the finalists.
“It was always his decision,” Mr. Madden said. “I was more or less the one who was there to say, ‘Yeah, Dave, you’re right again.’ ”
Mr. Murbach also looked after one of the world’s best-known urban gardens; Rockefeller Center has a couple of small parks, a handful of plazas, the famed Channel Gardens and more than a dozen office-building lobbies. Sometimes, he once said, he did not figure out exactly what to do until the plants he had ordered were actually delivered. Some years there were a lot of trucks and a lot of plants: he could easily find room for 10,000.
“He wasn’t simply a designer,” said Gregory Long, the president of the New York Botanical Garden. “He was more than that; he was a plantsman, someone who understands them, and that was a marvelous combination, season after season, year after year.”
David Paul Murbach was born on July 19, 1952, in Amityville, N.Y., and grew up in nearby Merrick. He graduated from the University of Arizona with a degree in natural-resource planning and horticulture in 1974 and spent seven years supervising the gardens at a private estate on Long Island. He earned a master’s degree in ornamental horticulture from the University of Delaware in 1984 while working at the Longwood Gardens in Kennett Square, Pa., an arboretum that was largely the handiwork of Pierre S. du Pont.
In New York he was a founder of the Metro Hort Group, an association of professional horticulturists.
Mr. Murbach is survived by a sister, Carol Wendy Murbach, of Merrick, N.Y., and a brother, Jonathan, of Ormond Beach, Fla.
As a boy Mr. Murbach had visited his father’s law office — in Rockefeller Center, with windows that looked down on the Fifth Avenue roof gardens.
Years later, while finishing his graduate work in Delaware, Mr. Murbach saw a classified ad and applied for the horticulturist’s job. One of his first projects was to restore those same gardens by replacing the hedges and resodding the lawns. He used old photographs as a guide and had tons of new soil hauled up, bucket by bucket, in the elevators.

this is sad to hear.
what name did he post under here?

Ries said:
this is sad to hear.
what name did he post under here?
Click to expand...

I believe it was diego7david.