Where can someone whose standards were set at the Carnegie Deli in New York, find the best New York Style Cheesecake & Hot Pastrami Sandwhich is Buenos Aires?

Carnegie Deli is 1 of a kind. I can't even find a comparison in Seattle or probably anywhere else in the US. I hope someone knows a place in BA but I doubt it.

Trying to find the things you like in BAthat are equal to those of the US is damn near futile.

3. Fresh cranberries and blueberries. They are only available in juice form at Dieteticas and are quite expensive. I settle for Canale blueberry preserves. The crops are grown for export.

Pepperidge Farm cookies have shown up on shelves of Disco and Coto, although too pricey for my tastes. I once treated myself to a package of Milanos that I bought in duty free on Buquebus.

I remember the days when cottage cheese was available.

These are things I've learned to live with out for ten years. I go crazy when a friend is able to smuggle in a bottle of Log Cabin in their luggage.

When I get a craving for cheesecake, I make one. Philadelphia Cream Cheese is back on the supermarket shelves after a two-year absence.
C

I found this recipe online...maybe you could try making it.

Speaking of Hummus, I actually did find some really good Hummus here, in a food shop on S. Ortiz between Cordoba and Cabrera. I think it was homemade and it was yummy - thanks for reminding me!

steveinbsas said:
Trying to find the things you like in BAthat are equal to those of the US is damn near futile.

I might be able to help with a few of these things.

1) The fruit, grain, nuts, & spice place that recently opened up on Junin b/n Tucuman & Lavalle has really big, nice quality dark raisins. Much bigger than you would normally find in a SUNMAID box back in the States... but they're good. And then they have normal sized yellow (green?) raisins.

Prunes are hit and miss everywhere, but I don't think that I've bought from these guys.

I got some the other day at a fruit place in Palermo Hollywood somwhere around Carranza & Guatemala. I've also found them at my fruit place and then I think at that place mentioned in #1. They're not great, but they'll do. They seemed to have been larger than US ballpark peanuts, but they weren't roasted after having been soaked in salt water (or whatever makes them salty in the States.)


3) There is a SUBWAY Sandwich shop around Lavalle & Reconquista in the microcenter. My roommate (she's British, but knows a thing or two about American cookies) occasionally goes there to get a cookie for her cravings. In the States Subway definitely has a white chocolate with macadamia nut cookie. So look up Subway locations in BsAs.
R

for pastrami, the closest thing i've found is Big Mamma in belgrano near chinatown:


for cheesecake you can check out Kansas:


neither unfortunately, will be anything close to any nyc deli.

First post here. Just moved to BA last month and have had some cravings of favorite foods.


I too am a Carnegie fan. I'll often schedule flights with a 5 hour layover in NY just so I can go there. When living in LA for the past 5 years, I'd often drive out to Vegas with the primary reason being to goto the Carnegie at the Mirage for pastrami and a potato kinish (best kinishes on the planet).


I haven't been to Big Mammas yet, but I've done some research.

It's no Carnegie (NY) or Langers (LA) based on the photo. But perhaps this will ease your pain a bit. 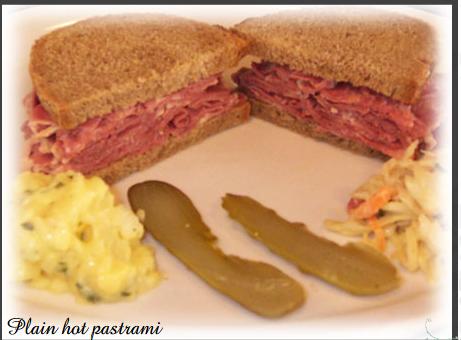 redrum said:
for pastrami, the closest thing i've found is Big Mamma in belgrano near chinatown: